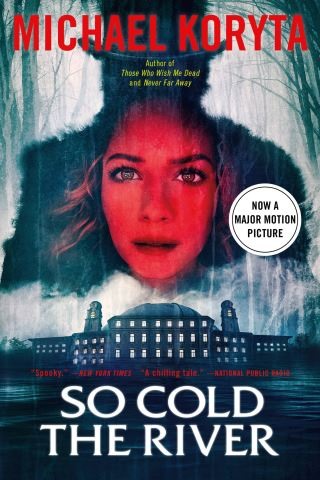 So Cold the River

It started with a beautiful woman and a challenge. As a gift for her husband, Alyssa Bradford approaches Eric Shaw to make a documentary about her father-in-law, Campbell Bradford, a 95-year-old billionaire whose past is wrapped in mystery. Eric grabs the job even though there are few clues to the man's past -- just the name of his hometown and an antique water bottle he's kept his entire life.

In Bradford's hometown, Eric discovers an extraordinary history -- a glorious domed hotel where movie stars, presidents, athletes, and mobsters once mingled, and hot springs whose miraculous mineral water cured everything from insomnia to malaria. Neglected for years, the resort has been restored to its former grandeur just in time for Eric's stay.

Just hours after his arrival, Eric experiences a frighteningly vivid vision. As the days pass, the frequency and intensity of his hallucinations increase and draw Eric deeper into the town's dark history. He discovers that something besides the hotel has been restored -- a long-forgotten evil that will stop at nothing to regain its lost glory. Brilliantly imagined and terrifyingly real, So Cold the River is a tale of irresistible suspense with a racing, unstoppable current.

Michael Koryta:
Michael Koryta (pronounced ko-ree-ta) is the New York Times bestselling author of nine novels, including The Prophet. His last three novels, The Ridge, The Cypress House, and So Cold the River were all New York Times notable books and nominated for several national and international awards.

In addition to winning the Los Angeles Times Book Prize, his novel Envy the Night was selected as a Reader's Digest condensed book. Koryta's work has been translated into more than twenty languages. A former private investigator and newspaper reporter, Koryta graduated from Indiana University with a degree in criminal justice. He currently lives in St. Petersburg, Florida, and Bloomington, Indiana.